Skip to content
Disclosure: As an Amazon Associate TelescopeFinder earn from qualifying purchases. 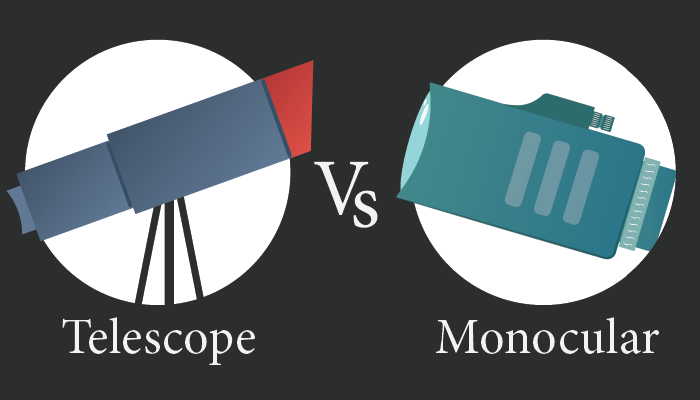 Telescope and monocular are very handy instruments for spotting far objects. We are going to take a brief look at both these tools to find out what makes them different and whether you should get a small telescope or a monocular.

On first look, monoculars look like a miniature refractor telescope. Where the light enters through one end and you see the magnified image on the opposite side. But this is where the similarities end.

Monoculars can be seen as a combination of telescope and a binocular. It has a single eyepiece like a telescope but you hold it like a binocular. They are much smaller than even the tiniest telescope in the market and needs absolutely no setup. You simply pull it out of your bag and use it straight away.

Monoculars are modified telescope which uses a series of the lens and sometimes prism to zoom distant objects. It is substantially smaller than a telescope and more compact than a binocular.

This simple design makes it easy to carry, some of them can even fit in the palm of your hands. That is the reason they are useful for hiking and hunting trips where you do not want to be weighed down by equipment. In addition to that, a monocular is very inexpensive and can be found as cheap as a few bucks.

Simple cheap monoculars have just 2 lens but high-end monoculars come with a prism between the lens which folds up the rays to make the length of the monoculars smaller while having a higher magnification.

A generic monocular comes with zoom – in the range of 4x to 10x. Now it is possible to go for higher zoom levels but it will substantially affect the quality of the image. The field of vision will get narrower in addition to that less light will enter the scope due to its small aperture resulting in a dull image.

Now, this is where the telescope enters the scene. A telescope is generally used at places where you want >30x magnifications. It is a better option if you want to gaze at far objects like a mountain top or celestial bodies like the moon. A telescope has a wider aperture which means they can collect more light from far objects resulting in a better-brighter image. 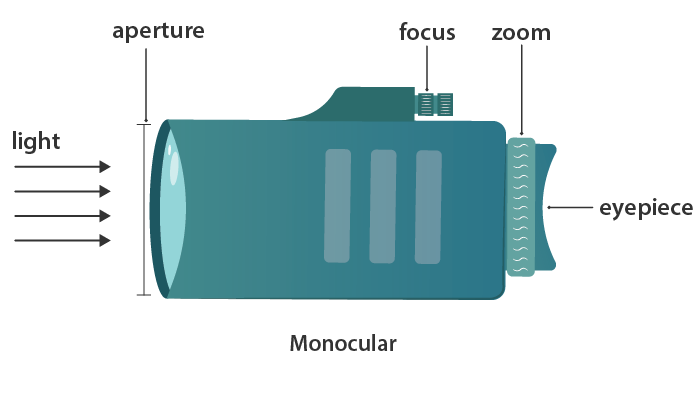 As mentioned earlier, monoculars are used in run and go situation and most of them require almost no setup. Telescope, on the other hand, are bigger bulkier and require a lot of extra equipment and settings.

Due to their very small field of view, a small hand movement or vibration can result in a blurry image. They always need a stable tripod. In addition to that, a telescope is made of multiple parts like eyepieces, which needs proper adjustment and calibration.

A monocular is a self-contained unit, which does not have separate bits and pieces like a telescope. They come with a zoom knob which is usually present near the eyepiece and a focus adjuster which takes little to no effort to set up.

It is important to note that – because of their limited uses, monoculars are less widely available. Some of the major optics and telescope manufacturers do not make monoculars.

Monoculars come in various forms with a number of features. Some of the most common monoculars are listed below

A basic monocular has the zooming power of 8x in addition to that its aperture is very small. The only celestial body you would be able to see is the moon. In that also you would not be getting a close view. Telescope has a larger aperture and greater magnification power which makes them ideal for observing planets.

Can a night vision monocular be attached to a telescope

yes, you can but not all monoculars could be attached. Attaching a monocular to the telescope may mess up a little by overexposing moon and other major bodies and paint everything green. But in return, you will be able to see the stars in infrared wavelength which was invisible before. The sky will look fuller and denser.

Why night vision monoculars so expensive

A night vision monocular has a number of complex electronic parts such as photocathode, photomultiplier and phosphor screen which adds up to the price of the monoculars.

Choosing between a monocular and telescope depends on what you want to use it for and your budget. If you are looking for a portable – easy to use – scope for your hiking trip and wildlife safari. Where you pull a scope out of your pocket and take a peek – a monocular would be the right choice.

On the flip side, if you want to observe mountain tops, moon, planets, stars or anything which is really far – a telescope is the right equipment for that task.

1 thought on “What is the differene between Telescope and Monocular? Compared”